Porció Ltd. Among the Top 5 Companies in the European Geothermal Innovation Award 2018

Porció Ltd. was endorsed by the 5-member jury as a finalist for the Gyopáros Production and Reinjection Geothermal System operating at Gyopáros Thermal Spa.

The Award is granted to companies that made an outstanding contribution in geothermal energy utilization in the form of innovative products, scientific research or project initiatives. The jury recognises originality, innovation, reliability, reduction in emissions and improvement in energy output.

This year a record number of 19 nominations have been received from around Europe. Porció Ltd. is the first finalist from Central Europe in the history of the Award, therefore this nomination was an important recognation for the geothermal industry in Hungary, too.

The importance of the award is further increased by the fact, that the method of reinjection of used geothermal fluids into the sandstone layers is less acknowledged by the European geothermal community. French experts in the Aquitanian Basin with similar geological conditions to Hungary have already stopped attempts without finding a solution. In Italy and Germany reinjection is less of a technological challenge. And so we Hungarian stayed fairly alone with the development of safe and economic reinjection method, of which one of the key milestones has been relised at Gyopáros Spa.

The award ceremony took place on the first day of the GeoTHERM Exhibition and Congress in Offenburg. On behalf of Porció Ltd. Ms. Krisztina Csongrádi has received the Certificate from Mr. Ruggero Bertani, President of EGEC.

The nominated project: The „Gyopáros” Production and Reinjection Geothermal System

On behalf of Porció Ltd. Ms. Krisztina Csongrádi has received the Certificate from Mr. Ruggero Bertani, President of EGEC. 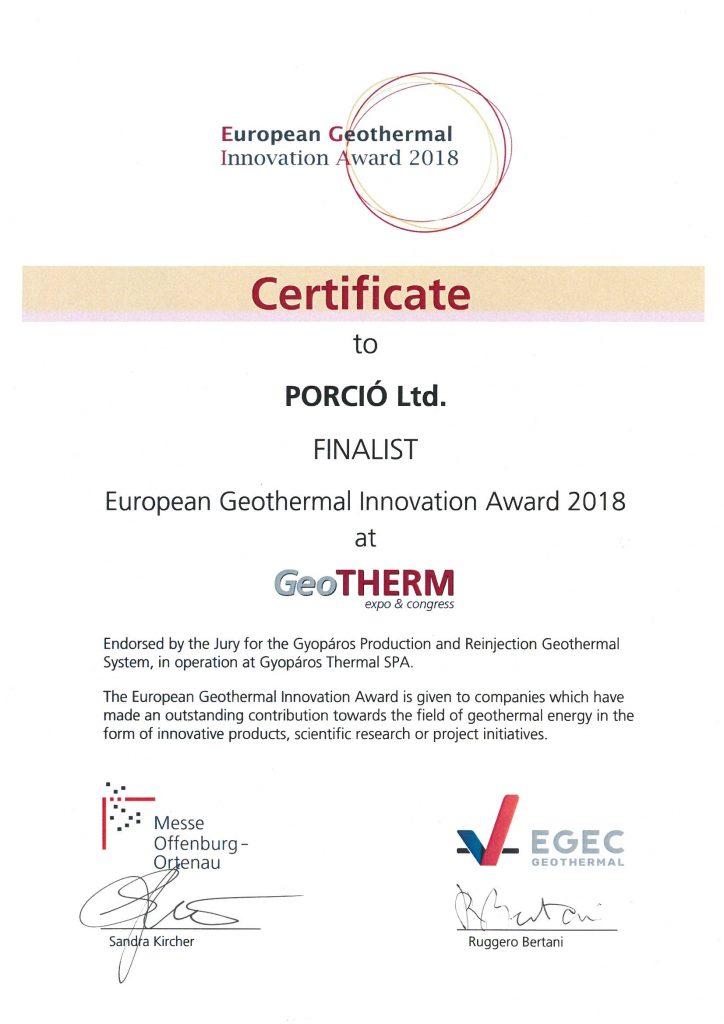